The history of the city of San Francisco, California, and its development as a center of maritime trade, have been greatly influenced by its location at the entrance to one of the world’s best natural harbors. San Francisco is the name of both the city and the county, which share the same boundaries.

The first Native Americans to settle this region found the bay to be a vast natural resource for hunting and gathering their provisions and for the establishment of many small villages. Collectively, these early Native Americans were known as the Ohlone, and the language they spoke belonged to the Miwok family. Their trade patterns included places as far away as Baja California, the Mojave Desert and Yosemite.[1]

The first Europeans in the vicinity of what would become San Francisco were members of a Spanish exploratory voyage led by Juan Rodriguez Cabrillo. Cabrillo, sailing north from Mexico, explored the coast as far north as present-day Point Reyes, but failed to discover the entrance to San Francisco Bay. An English expedition led by Sir Francis Drake may also have sailed past the bay entrance, in 1579.[2] Drake mapped the coast farther north at Drake’s Bay, naming the area “Nova Albion”, but made little effort to claim or settle the land. 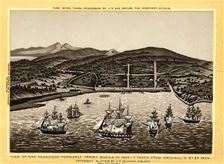 The earliest Europeans to reach the future site of San Francisco by land were a Spanish exploratory party in 1769, led north from Mexico by Don Gaspar de Portolà and Fra. Juan Crespi. The Spanish found this location to be of great strategic significance, and a follow-up land expedition led by Juan Bautista de Anza selected sites for both military and religious settlements in 1774. The Presidio of San Francisco was established to be the center of military activities, while Mission San Francisco de Asís began the cultural/religious conversion of some 10,000 Ohlone who lived in the area.[3] The mission was also known as Mission Dolores because of its nearness to a creek named after Our Lady of Sorrows.

The first ship anchorage was established at a small inlet on the north-east end of the peninsula (later filled: now lower Market Street), and the small settlement that grew up nearby was named Yerba Buena, after the herb of the same name that grew in abundance there. The original plaza of the Spanish settlement remains today as Portsmouth Square. Today’s city took its name from the Mission, and Yerba Buena remained the name of a San Francisco neighborhood also known as South of Market. The Moscone Center and Yerba Buena Gardens are in the Yerba Buena area. In addition, the name Yerba Buena was applied to the former Goat Island in the middle of San Francisco Bay, adjacent to Treasure Island.